The above photograph is special and historic for several reasons:

This government’s make-up is a fairly normal one for Finland where five political parties have together formed a coalition to govern.

This is a super-conservative country where people are generally well educated, well informed and do not like flouting themselves – they are modest and self depreciating – Trump and Johnson are regarded with horror, while Macron raises eyebrows… The rest you can work out for yourselves but pragmatic Protestants is a good description of the average Finn, including active party members, the numbers of which are falling rapidly…

The 5 parties in government have very different histories but these are not so relevant these days. These pragmatic Finns can work together across party lines when necessary – real compromise is a necessity for small countries in these huge global markets. Only big countries have the luxury of bloody warfare across the battlefield… and that may not be much of a luxury! It is probably better to describe it as a loser’s game because it is taxpayers who pay the costs of such actions. 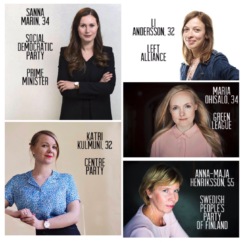