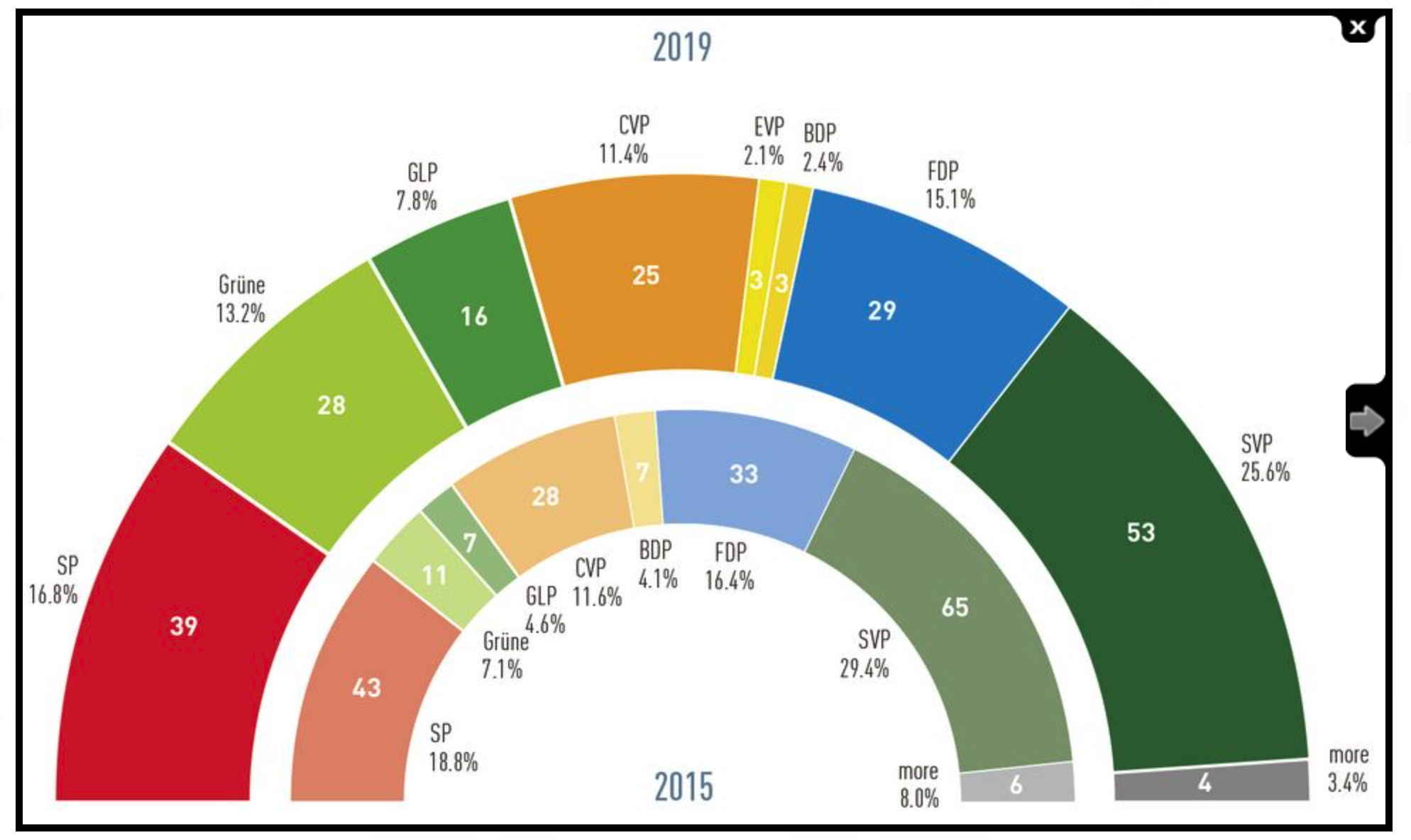 The green parties made unprecedented gains in the national elections last November. The new parliament will comprise far more women, and its make-up will be slightly younger and more left-leaning. Overall, the shift is dramatic. Voters from the “Fifth Switzerland” helped to drive this result.

Stability and balance are such strong influences in Swiss political life that national elections rarely produce tectonic shifts. Yet political experts have had to resort to employing superlatives in the aftermath of the 2019 elections, as they unanimously cite a change of “historic proportions”.

What happened? Essentially, the electorate opted for environmental parties in greater numbers than ever before. The Swiss Green Party (the Greens) gained 17 seats in the National Council and now has 28 National Councillors. No party has made such a leap forward since 1919, with the Greens now one of the four strongest parties in terms of voting share (Percentage share of the votes: see diagram).

This result is notable for how consistent it is across the country, regardless of the linguistic divide. The Greens even made strong gains in Ticino. They also outdid the opinion polls by a considerable margin. National Councillor and Green fraction leader Balthasar Glättli (canton of Zurich) reacted to the spectacular result almost in disbelief: “I never expected this in my wildest dreams.”

The gains of the centrist Green Liberal Party (the Green Liberals), who ended up with more than twice as many seats as previously, made for a green win-win. With a combined total of 44 seats in the National Council, the Greens and the Green Liberals now wield considerable clout on environmental issues. The ongoing climate debate was certainly a driving factor behind the power shift. Forget elections to the National Council and the Council of States – “climate elections” was instead the term on everyone’s lips.

Parliament is now greener than the results would suggest

Indeed, the success of the two green parties at the ballot box is only part of the story, because the “green wave” had already begun rolling in before the elections. The writing was on the wall from the outset. Take the Liberals (FDP), whose stance on a number of important environmental issues suddenly turned greener towards the end of the election campaign. For example, they announced in autumn that they were in favour of introducing an environmental tax on plane tickets, whereas previously they had tried to scupper this green levy. The party lost four National Council seats, yet the outcome might have been worse without this about-turn. A poor showing from the Swiss People’s Party (SVP), which railed consistently against “climate hysteria”, shows what could have happened. The SVP lost as many as twelve seats but remains Switzerland’s strongest political party. These losses are not only due to the SVP’s attempt to ride out the climate debate, but are also down to the party’s key messages on migration and the EU falling on much less receptive ears than four years ago.

Parliament has shifted only slightly to the left

All four parties in government – SVP, FDP, CVP and SP – were punished at the ballot box. The SP, which sees itself as green by nature, was hit hard, evidently losing votes to parties that are green by name. Although the Greens more than offset the SP’s losses with their emphatically left-wing social policies, the upsurge of the Green Liberals means that the new parliament will primarily be much greener but not considerably more left-leaning.

This could have a liberating effect on political discourse in Berne, as the bloc mentality of left and right wing loses significance. The combined green parties will constitute a third pole on environmental issues, while the centrist CVP, still a strong force despite election losses, will focus increasingly on striking compromises with the various power bases.

Many more women in parliament

Besides climate issues, the national women’s strike in June also had an impact on the election results. The proportion of women in the National Council has risen from 32 to 42 per cent – a sizeable contingent even by international standards. Never has the number of elected females increased as much since the introduction of women’s suffrage in 1971 – a result not even the initiators of the Helvetia is calling! women’s movement dared hope was possible (see page 8).

Not only has Berne become decidedly greener, notably more feminine and a little bit more left-wing, but the average age in parliament has also fallen. Many of the newly elected MPs are relatively young. This is partly down to first-time voters, who in post-election surveys expressed scant regard for what some of the more established National Councillors may have accomplished in the past. A total of 30 MPs of every political persuasion consequently lost their seats. These include prominent trade unionists such as Corrado Pardini (SP, canton of Berne) as well as the two linchpins of the Swiss Chamber of Commerce, Jean-François Rime (SVP, canton of Fribourg) and Hans-Ulrich Bigler (FDP, canton of Zurich).

The Swiss Abroad doubled down

It would be fair to say that voters in the “Fifth Switzerland” amplified the major trends in this election. Initial surveys showed they were particularly keen on the colour green. A quarter of all votes from abroad (25.2 %) went to the Green Party, who consequently overtook former front runners, the SP (17.1 %), as well as the SVP (17.8 %) to become the strongest party in the “Fifth Switzerland”.

Originally published November 2019 in the Swiss Revue by Marc Lettau

We Need Public Financiers More Than Ever